The Goldsmiths Guild of South Africa: A brief moment

For a brief moment during the mid 1970’s, a number of local goldsmiths came together to create a better structured environment in which they could work. They formed the Goldsmiths Guild of S.A. It was a time of hope and enthusiasm, but it did not last long.  Even though all of the founder members enjoyed national recognition for their work, their technical and creative brilliance were not strong enough to withstand the forces that were working against them. Within a decade their dream of a better future fell apart.

Late in 1973, under Peter Cullman’s leadership, the Goldsmiths Guild of South Africa was born in Johannesburg. Other founding members were Erich Frey, Dieter Dill, Ewald Kratz, Liz Bezuidenhout-Kratz, Kurt Donau, Jochen Kessel along with Hartmut and Ilse Jäger. All, except for Liz Kratz, were immigrants from Switzerland or Germany. They were extensively trained and highly skilled precious metal artists with master’s degrees in design and goldsmithing along with qualifications in gemmology. The majority were schooled at Pforzheim in Germany.
A three page constitution was adopted at the founding meeting of the Guild. Their aim was to produce and promote high quality jewellery as an art form and to hold nation-wide and international exhibitions.  Another lofty ideal was to raise public awareness of the originality of South African designed gold and silver jewellery. The association was to meet from time to time to plan the implementation of its aims as well as to share information on new designs and techniques in experimental jewellery making( including the use of facetted gem-stones, mineral specimens as well enamel). 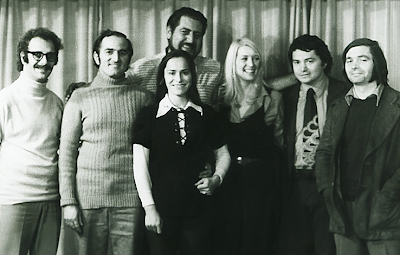 The Guild created a logo (a smith’s anvil in combination with a stylized ring) that members were requested to stamp on their work in conjunction with their own makers marks as well as the caratage of the piece. After earlier attempts to establish a South African hallmarking system was abandoned in the late 1700’s, talks were taken up again since 1938 to establish a proper register, but no final agreement materialised amongst the members of the South African Jeweller’s Association of the time. The directive of the Goldsmiths Guild to its members to produce works with their own marks and guild’s stamp of approval, constituted the first real attempt to reintroduce a local standardised hallmarking system again. In an effort to differentiate their work from manufacturers who made use of mass produced techniques, the Guild’s constitution specifically stipulated that

No jewellery of repetitive or ordinary nature may bear the logo stamp of the guild.

Membership of the Goldsmiths Guild was optional and recommendations made by the Guild were not binding to the local goldsmith community. From the onset the Guild gained representation at the S.A Jewellery Council. Nevertheless, the proper organisation of the Industry as a whole (which included the field of gemmology) remained open ended throughout the twentieth century.

At an Intergold jewellery competition held by the Chamber of Mines in 1974, members of the Goldsmiths Guild received 10 awards including three first prizes and the most outstanding design in gold. In 1977 Ewald and Liz Kratz won the coveted Diamonds International award. In 1975, two years after their formation, the members of the Goldsmiths Guild arranged their first group exhibition in Johannesburg to be followed by an exhibition in Stellenbosch later in the same year. A total of 120 pieces in silver, gold and platinum were on display. A number of other exhibitions were also held by twinning haute couture with artist jewellery. Jewellers and dress designers collaborated on designing clothes with fitting jewellery that was exhibited in fashion parades at the Rand Eater show. In 1979 the guild even opened a short lived Goldsmith Gallery in Rosebank, Johannesburg where they intended to feature permanent exhibitions by South Africa’s foremost goldsmiths. 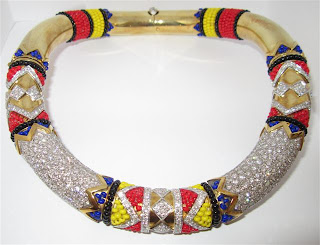 Given the individual and unique design of every piece they made, these goldsmiths were artists in their own right. Precious metals became their sculptural bases with which they combined texture, relief, line and colour to create jewellery of high quality. Precious stones were integrated in their designs to punctuate or emphasize aspects of their compositions. However, with youthful boldness, this generation of goldsmiths also expanded their palette of design materials to include organic elements such as wood and ivory. In some cases, copper and perspex were also integrated in their designs. They also celebrated the abundance of South African semi precious stones by absorbing these into their work. The imaginative captivation of unique colour tones inherent in stones such as tiger eyes, amethysts, agates, rose-quartz and jade in their creations, gave way to an increasing acceptance of semi-precious stones as part of leading jewellery design in South Africa. 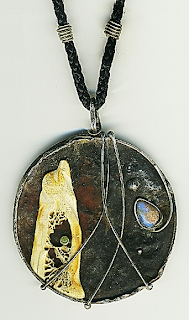 Figure 3: A pendant by Hartmut Jaeger

Some goldsmiths used their well developed technical skills to collaborate with local painters and sculptors in giving expression to sets of jewellery and flat ware. For example Kurt Donau collaborated with Cecil Skotnes, Edoardo Villa and Hannes Hars on a number of occasions. In 2012 a pair of cuff links designed by Cecil Skotnes and made by Kurt Donau was auctioned for R9 500 by Stephan Welz & Co. in Johannesburg. In another collaboration, Erich Frey worked with Walter Batiss and Alexis Preller on creating jewellery ware and medallions. Frey’s legacy is also gaining increasing attention at auction. In February last year, at the Strauss & Co. auction in Cape Town, a collection of Erich Frey jewellery that contained bangles infused with elephant hair, were sold well above the auctioneers’ estimates.

However, the conditions in which the Guild did its work conspired against their successful growth. Chief amongst these was an unresponsive and largely indifferent government that looked upon the profession with suspicion. More often than not, local goldsmiths were regarded as potential illicit traders of raw precious metals. Consequently, little was officially done to nurture and develop an organised community of resident gold- and silversmiths. Only in 1987 was the South African Jewellery Association formally recognised as a representative body by the government.

Political instability caused by the policy of separate development along with the job reservations act further compounded the problem of rooting an indigenously sound and prosperous goldsmiths association. Whereas little formal training and job opportunities for black South Africans existed in the sector during the 1970’s, white goldsmiths had to deal with increasing international sanctions that made exposure of their work very difficult, resulting in having to work in a small local market.

Also internally, within a few years of its formation, the Goldsmiths Guild began to neglect the mandate contained in its constitution. Already in the early 1980’s their group exhibitions began to dry up and some failed to implement the recommended hallmarking system. During the late 1970’s members of the Guild began to emigrate to other countries, especially after the Soweto riots in 1976. Over the years that followed, all of the founding members of the Goldsmiths Guild of South Africa took their considerable skills to settle elsewhere. Along with political instability, a sharp increase in theft and violent crime compelled most to emigrate from South Africa. Peter Cullman relocated to Toronto while Erich Frey and Dieter Dill returned to Germany. Kurt Donau resettled in his native Switzerland. Ewald and Liz Kratz as well as Hartmut and Ilse Jäger emigrated to Australia. 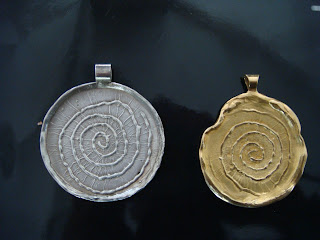 Figure 4: Gold and silver pendants, Walter Batiss and Erich Frey collaboration
By the late 1980’s membership numbers have dropped to such an extent that the Guild was not deemed to be a viable association anymore and the remaining members amalgamated with the Jewellery Manufacturer’s Association.
The formation of the Goldsmiths Guild of SA represents a notable effort to create an organisational platform for the advancement of high quality local jewellery. Unfortunately, due to the constraints at the time, it was destined to become only a momentary flash in the pan of our local jewellery making history. 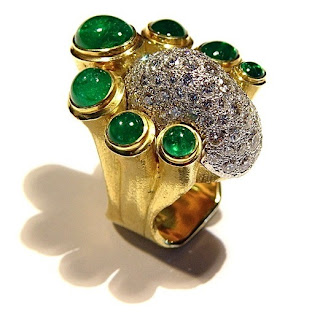 The aim of this blog is to gather and disseminate information on 20th century gold- and silversmiths in South Africa. This include the recording of names, maker’s marks and the dates they were in use, contributions, biographies of the gold- and silversmiths, published and as yet unpublished information along with interviews on the history of the creative precious metal market in South Africa.

I have published a few articles on this topic in the South African Journal of Cultural History. in the process of gathering information, I realised that much more on this era of gold- and silversmithing in South Africa still needs to be uncovered and documented. Hopefully this website will be of use to gather information on the legacies of local gold- and silversmiths.

Please feel free to comment and add information that may be helpful in refining and colouring in our memories of the goldsmiths of South Africa and their work during the 20th century.

Fred
My fascination with the creative joy behind precious metal artistry has made me want to know more about South African precious metal artists and their creations. I know there are others too who share in this quest to record our gold- and silversmiths' pursuit of beauty and wonder - an appreciation of the interplay amongst design, texture, colour, reflection of light. During a school holiday in 1969, I learned how to cut and polish semi-precious stones by hand. This lead to a life long fascination with the design of jewellery. At collectors' markets I noticed the makers' marks of local jewelelry but found very little documented information. I began spending time in the National archives and interviewing retired goldsmiths Through their eyes, I began to record and compile as much as I can about their legacies. A childhood hobby has evolved into agreater appreciation of local precious metal artistry.